If you read last years guide, you should be somewhat familiar with the idea of Cuffin’ Season. [ You can always refresh your memory here ] However, instead of just giving you the same exact calendar, many new factors had to be taken into account. New dangers you need to be aware of that threaten your Cuffin’ likelihood. In the past year I’ve had time to observe, study, and keep note of these events. I even called in a few people to assist on speaking on some of these dangers. So with no further adieu…

Cuffin Season officially starts the first day of Fall, and this year that happens to be September 22nd 2012. Now I know what you’re thinking. You feel that chill in the air? You did notice it right? “If Cuffin’ Season starts in Sept., what do we do now?”

“You ain’t the only one that’s trying to be the only one.” Whether you want to believe it or not, you’re in a competition. Sounds, silly, right? Think about it though, anything expected to be done well requires proper preparation. You don’t wing excellence. Buildings need blueprints. Coaches use playbooks. Even your favorite dishes have recipes. And the Game of Cuffs is about having a plan of execution.

(A brief synopsis of each Phase)

As of  right now, you should be scouting out potentials. Flirt around, see what’s out there. You don’t need to start locking anything down just yet – but be aware. Need a slightly faster way to weed out who’s interested? Lust Hours. Most people go through this and never realize what it is. It’s late. 1am. 2am. You have work tomorrow, so what. Send that “u up?” text. If they’re up and interested, they’ll reply. Nothing like some late night boo talk to get things rolling. Really feeling them? Throw in a smiley face or two. See where that 1:30am “hey :-)” txt gets you. Remember don’t play in this phase too long, you want to have someone in mind as you move from pre-season to the main event.


Labor Day Weekend aka The End of Single Season:

Yep, that’s it. It’s over. The last big ‘party’ weekend. At this point if you decided to not hang out with one of the people you’re currently looking into, this is officially your last ‘Ho Hurrah’. No really, get it out of your system. Engaged couples get Bachelor / Bachelorette parties, you get labor day weekend. If later down the line trouble were to ever arrive due to a Charles/Charlene intervention, you’ll always have the “that was before we got together/serious” card. You’re covered.

Of course by now you should’ve already weeded out the one you’re focusing on. Time to work. Between Labor day and today, if you have at least been loosely following these steps.. calls, good morning texts, your first date (2nd if you skipped out on your Ho Hurrah), etc. then you’re well on your way.

Yes, we can (cuff.) This is essentially another date weekend but the emphasis is to make it special.You’ve been caking. Flirting. Talking. You should have an idea of one of the few things she really likes. Build on one. She likes bowling? Take her. A cool conversation through the park and ice cream? Go for it. Dinner? Why not. This is going to give you some much needed leeway for the week that follows..

October 2nd, 2012 marks the release of 2K’s sports latest basketball simulation game, NBA 2K13. Women looking to gain the attention will strategically wait until late Monday night into Tuesday to begin professing that *IF* they had a BF, they’d love to do NOTHING more than buy him a copy and sit quietly while he play’s for hours.

These perfect ‘I love everything and can disassemble a rifle while delivering my own pregnancy, and sweeping the floor at the same time’ women are what many on twitter refer to as “Twitter Honey’s”. Also loosely categorized under the term “Charlene”. Charlene is the gf your gf can’t be. Never upset, emotional or complains. Avoid this trap. The grass only looks green until you make your way over there. Charles is no different. He’s the friend in your potential boo’s ear telling her what she wants to hear. “Guys need to grow up. Video games are for children. Why play 2K when I have a beautiful woman around me all the time? See, if you were my girl….”

This being such a trying matter, I had to call in an expert on the Charles situation:

@iDisrespectHoez:
“Like any other time where relationships and courting of young beautiful ladies is involved, you know that the man Charles is going to be hanging around trying to fuck up everything you got going for you. So you found you a young lady that you see as a perfect match for your cuffing season relationship, you think everything is going smooth when out of no where Charles shows up ready to ruin everything that you had going for you. Charles maybe her ex boyfriend or just some random dude from work, he heard you are in the picture and he wanted to make sure no one takes his old girl.

No one said that cuffing season was gonna be easy, if you are going into this you gotta make sure you are committed and ready to face competition from other potential suitors, including Charles. Just remember that Charles dont care about you, all he cares about is stealing your unicorn. You can’t be afraid of Charles, but you gotta be ready for a battle. Cuffing season is very stressful breh, no one said it was gonna be easy. Make sure you know what you are doing, you don’t wanna end up with a dud and be regretting a few months of cuddling and netflix dates. But you also don’t wanna end up alone either. Either way you just gotta stay calm.”

This might be the easiest part. Following everything presented to you so far, you should be able to autopilot right into the finish line before the thirst and sadness of your competitors even has the slightest chance of reaching her heart. Enjoy that victory lap champ, you earned it.


The Thirst Rush is Underway:

You’re managing to stay one step ahead of Charles and his scheming ways, but you’re far from in the clear. The true challenge awaits. Charles didn’t come to this battle alone. He just tagged in one of the oldest raw emotions that when at its full capacity, can take control of even the most level headed person. THIRST.The weather has been changing. More time is being spent indoors. And if you didn’t know, Social Networks and Loneliness begets thirst. More Facebook pokes, Instagram Likes, etc are taking place. Your boo isn’t safe. You really think they aren’t getting liked and poked too? Don’t trip, if you’ve been following along with the guide, these cries of thirst will go unnoticed. But things are prone to get much worse long before they get better… 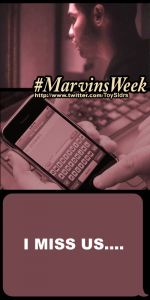 I’m Just Saying, You Can Do Better.. #MarvinsWeek:

Everything in this guide has led to this point. Possibly the toughest week of Cuffin Season. What makes this so significant? It’s right before one of the major holidays. Thanksgiving. People are spending time with family, friends and loved ones. But not everyone. Unfortunately, some will be alone. All the wolves are out by now. Charles has caught his 2nd wind. Charlene has revised her game plan. Thirst is at its peak.

In the Game of Cuffs, there is no fair play. They’re gunning for your spot. They’ll text her. Call her. Leave ‘gram comments. Whatever it takes. However, you played the game too well. Flawlessly even. For someone who ignored the guide however, losing her to a convincing ex is a possibility. Don’t be that sad story.

Speaking of Sad, if you’ve noticed each and every weekend up until now has gotten sadder. “Sadderday” also reaches its peak. Super Sadderday. 🙁 It’s almost as if all the sadderday’s past and Marvin’s week have combined to form The Voltron of Sadness. I reached out to one of the top 3 saddest people on the internet to share some wise words:
@NerdAtCoolTable:
“Sadderday can pop up any day and anytime during cuffing season. It’s the moment you realize you’re dead ass lonely ..either because you can’t find love or you did some dumb shit to be without love for that moment. You man up (or woMan up) and just accept the sadness. You embrace it. “

Still with me? Yeah? Then celebrate. You’ve made it. You’ve kept the wolves at bay, survived Marvin, foiled Charles devious plans, and even persevered through the dark abyss of Saddness. Another year has passed and it seems as if my job is done. May take a few times to read it over but take everything you learned here and go be great. Just remember, Winter IS Coming.

Shoutout to both @iDisrespectHoez & @NerdAtCoolTable of NerdAtTheCoolTable.com for sharing their expertise in each field aswell. Kudos fellas. Also follow me under the brand’s twitter, @ToySldrs. Lastly, Cuffin’ Season tees? You know it. View the shop for more info. http://toysldrs.bigcartel.com Need Sadderday tees? email sadderday.shop@gmail.com

Cuffin’ Season 2012 Calendar + Guide by Dennis Joseph is licensed under a Creative Commons Attribution-ShareAlike 3.0 Unported License.
Based on a work at http://toysldrs.com/cuffin-season-2012-calendar-guide/.