I was sitting around, watching my old Sailor Moon tapes, (because that’s what I like to do sometimes) and I was commenting on how “Evil Chaos” was, but not really all that scary. Then I began to think, well who WAS scary? And maybe not even scary, noteworthy? These probably aren’t the worst anime villians of all time, but they were good. 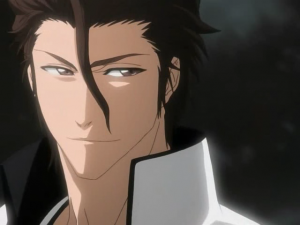 Why?
Because of the sheer intelligence of this one man. Not only was he the very essence of diabolical, but he was meticulously evil, prideful, snooty, classy. Overbearingly arrogant, but never being discourteous. And let me expound on meticulous. The intricacies of his plot, which he never REALLY explained until the final moments, were extraordinary. No one ever really knew what Aizen was planning until he told you. His next move? Calculated and deftly planned. Every step accounted for until you know…he was overpowered, by the very thing he held the dearest. 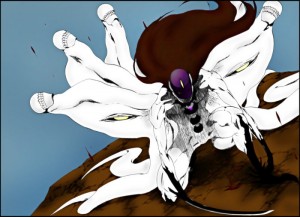 Then he pulled this little juke move on us.

“I will not take your lives. With the measure of power that you possess you are unlikely even to lose consciousness from those wounds. Stay there, helpless and defeated and observe carefully as this battle reaches its conclusion. 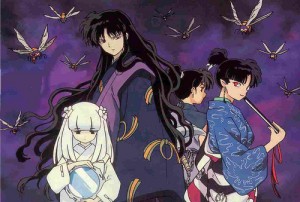 Why?
As with most anime villains, his maliciousness was masked behind a veil of beauty. But, however effeminate Naruku seemed, nothing outweighed his focus. A complete Shikon No Tama. An ultimate goal is a necessary evil when it comes to villains. But for Naraku it was his willingness to use every dirty trick in his book to get what he wanted. Slaughter of complete villages, pitting friends against each others, former lovers against each other, supposedly dead family members up against the one that survived. Hell, he even used a henchman that resembled a baby! All to corrupt the balance of the Shikon No Tama, that he got but neeeever quite “got”. And to get the girl…which he ended up killing. 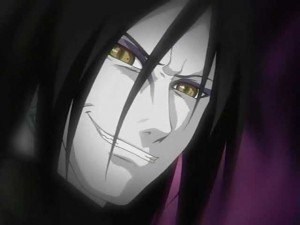 Why?
Because he ain’t give a fuck, that’s why. Orochimaru wanted to do what he wanted to do, and nothing else mattered. His former team, his clan, his village, his master. None of that mattered. He wanted to know ever jitsu known to man, and anybody be damned if they stepped in his way. This involved waking the dead, destroying his village, corrupting Young Sauske, Poor Anko, and poor poor Kimimaro (who was so geeked to have his body taken over I didn’t know WHAT to think.) He held no allegiance, and the closest thing he had to an ally was Kabuto (probably because he was batshit crazy as well). And then there are the snakes. *shudders* 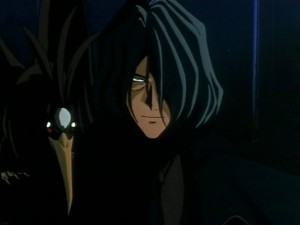 Why?
Insane? Yeah. Bloodthirsty? Perhaps. Posessed some of that Orochimaru “Fuck it”. YES. Power-hungry and pure manifestation of his name, Vicious was a katana-wielding B.A.M.F. whose reputation was a glowering beacon of fear to anybody that crossed him or his path. Former partner to our protagonist, Spike, they fell out after Spike left the Red Dragons. Believing that he is Spike’s only equal rival; he places a bounty on Mao (a surrogate father) in order to bring him back to the surface? To do what? Kill him and anybody else who dares to oppose him. 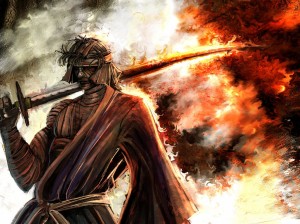 Why?
Here’s your insane villain. But not the complete loss of sanity villain. Shishio Makoto was always a bloodthirsty man, he thought processed revolving around the single thought that a sword was made for killing. A Sociopath used by the very same government to be a killing machine (not for the same idealistic reasons as his predecessor Battousai, but just because they knew he enjoyed killing). And when the war was over and they had no use for him? They burned him and left him for dead (mistake). With a charred mangled body, a bloodlust and countless connections, Shishio rose to the top of the infamy by challenging the entire Meiji government, to best some of the most legendary fighters of their period (including the Wolf and Kenshin himself) only to succumb to the death the government had planned for him from the very beginning.

“ I was burned, every inch of my body in pain shouting for death, and it’s hell. Now, do you think that hell is not here on earth? If hell is not here, then why the hell should I keep you alive?” 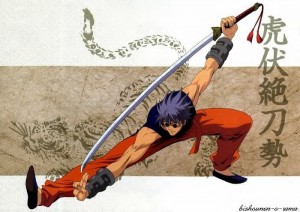 Why?
Unlike his villain-any predecessor, Enishi was completely driven to maddening revenge by heartbreak. A misunderstanding yes, but watching the death of his beloved sister at the hands of her husband, Kenshin, had tipped over the sanity jar. Tomoe was the only person Enishi had in the world, so it’s understandable that he would be devastated by losing her. But Enishi wasn’t devastated; it changed his world (his hair turning completely white from stress being one of the first indicators.) Enishi used his intelligence and connections to surround Kenshin and everyone he held dear, under his own brand of revenge called Jinchu. Here he meticulously mentally mindfucks with all of our main characters, Kenshin getting it the worst (yeah, I cried so what).


“My name is Yukishiro Enishi. You killed my sister. Prepare to die”

( Ha! Not really. Couldn’t find one I really liked.) 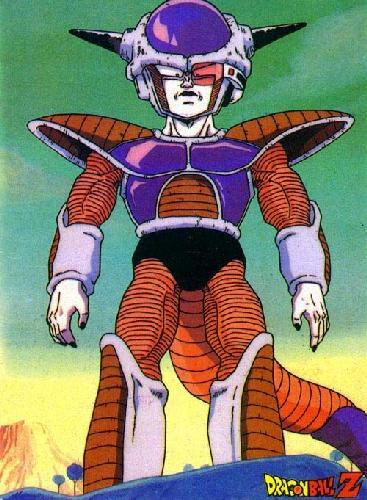 Why?
To tell you the truth, besides Sailor Moon, this was one of the main animes I watched as a child. Imagine being 11 years old, a girl, and then watching the introduction to one of the most fearsome villains a cartoon had ever seen? I was scared shitless. Then he did ALL THIS? 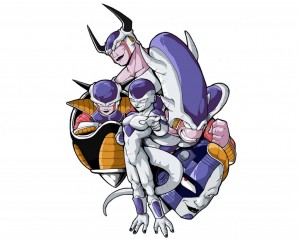 Oh you wasn’t scared? You lying.

But in reality nobody knows, right?

Producers in the music industry do a lot of moving and shaking. Much like the artist, they do so to get their name, and sounds known. Unlike artist tho, they tend to have a stonger staying power because they tend to be able to adapt their sound. There are producers that stay primarily within a realm comfortable them ( a particular genre or sound ) and then there are artist who go beyond that. FAR beyond that.

Teddy Riley? Yeah. Mr. All I Wanna Do Is a Zoom Zoom Zoom in Yo Boom Boom? It’s been years since I’ve heard his name come up in a conversation about music that wasn’t mocking him in years. Teddy Riley, of GUY and BlackStreet fame, has two stepped his way into the Korean music market with groups such as Big Bang, Jay Park and his new love, the girl group Rania. 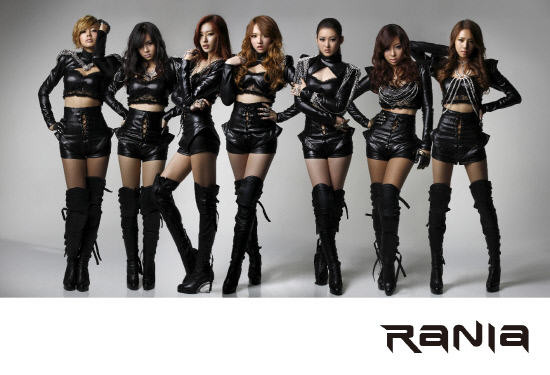 Guys, you may REALLY like this video…hell Gals, too.

Teddy was recently featured on a popular TV show Inkigayo, where he witnessed first hand artist such as the legendary DBSK and Big Bang and apparently liked what he saw.


(Here is Teddy in Korea, living it up, meeeting up with Big Bang, and speaking on working with Rania.)

Kanye West and Darkchild. Yeah, ya boy Yeezy took to the group JYJ extra hard, by actually featuring himself on one of their tracks. All you stateside bums couldn’t get Yeezy to press the beat machine two times for you, but here he is. He brought along with him Rodney “Darkchild” Jenkins to help him produce JYJ’s first English language track “Aye Girl”. Malik Yusef, a famed poet is also featured on the song.

If you want to see Rodney speak highly of Junsu, Jejung, and Yuchun, read this article.
Living Life Like There’s No Damn Rules

Will. I. Am has always marched to the beat of his own drum. So it’s no wonder that when we found out that Mr. I Am had pretty much adopted the group 2NE1 and is intriciatly involved in their Stateside American release, we weren’t surprised. Will. I. Am has been flying to Korea often to meet up with the four girls of 2NE1 (Dara, Pak Bom, C.L, and Minzy) to discuss everything related to them becoming the next best thing here in America. 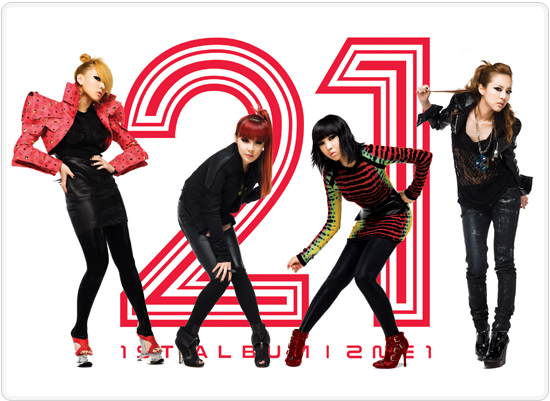 Movers and Shakers, for real. They get their work in. And I appreciate it.

It’s actually hard for a lot of people to realize that Hip Hop isn’t just an American thing anymore. Although we are the founders and pretty much the embodiment of it here, Hip Hop is a culture that has spread beyond the boundaries of the States. Canada, Russia, Africa, England…all of these places have taken a piece of that culture and made it a bit their own.

Zico from recently debuted idol group Block B, isn’t what we considered a bubblegum artist like some of his other Korean counterparts. He’s a little bit grungier and has a street appeal that a lot of the other idols in his line of work don’t possess (Minus the glitter and guyliner that he wears from time to time…(._.).

So that leads me to a freestyle that I happened upon on my ownst (yeah I made that word up) Tumblr wall.

Lyrics:
(Rough Translation)
I’m only 19 and still full of energy

I wear my headphones and don’t stop my gesture

They react and say “What the?”, when this kid starts rapping with a tongue twister

Now you tell me you can’t handle this rap game

These pedestrians are lurking in the back

These slackers see blood from a killer

An arrow with poisoned criticism shot but missed

One bill mentioned﻿ above another

They challenge themselves to penetrate some girls

Typing up the skills along with the context, but I’m already like Lee Oi Soo

uh…? I don’t have time to waste like the others

I allow myself to breathe when I’m free

Not Lupe Fiasco on the mic, but it sounds awesome, and like I said, compared to his other rap cohorts, this is X Rated.