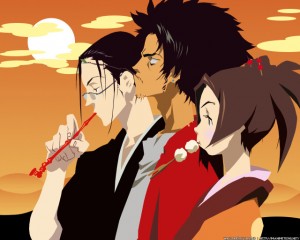 I am writing you with all the love one can muster for three imaginary characters set in a Tokugawa shogunate, Edo-esque period. My heart, the poor thing, can’t contain it’s excitement from the very thought of you. The way you effictevly blend modern concepts with ancient ones. The way you effortelessly keep us entertained while infusing us with history lessons. Oh, Champloo. Why were yo only 26 episodes long? The torture! Where are you now, Mugen, Jin and Fuu? Why are we left to wonder as to what happened to you? Fans have resorted to easing the pain of your departure with fictions and cos-play. Come back. We miss you. We love you.

Okay. Now that I got THAT out of the way. It’s hard to be a hardcore fan of cartoons; anime to be more specific, and NOT have heard of Samuari Champloo. If you are like me, you’ve seen the anime once…or five times and also purchased the box set to go along with it. Why? Because Champloo is a cornerstone of anime. Why, you ask again? I’ll tell you.

There are thousands upon thousands of animes, mangas, OVA, ect floating around on the television, Ebay, comic book shops, my hardrive, the internet. But if you were new to the genre and were to ask a fan, you’ll be hardpressed to find someone who wouldn’t mention Champloo as a series you should watch. Especially fans of hip hop. Shinichirō Watanabe found a way to fuse modern hip hop culture with a storyline set in the Edo period of Japan’s history. Beatboxing, breakdancing, rap, Mugen’s whole existence, is centered around urban hip hop culture, while remaining true to the period itself.

The story centers around a girl name Fuu, who has lost her mother and on an eternal search for the father that left her. A man who smells of Sunflower. That is her only clue, and with that drags Mugen and Jin along to help her locate the man that abandoned her and her mother. 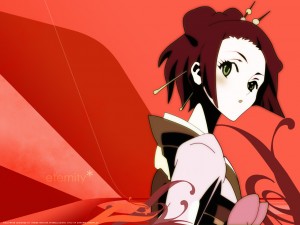 Mugen, manages to save her from an unjustly punishment and somehow ends up duking it out with Jin, thus the two becoming lifetime “enemies” for most of the series. Only by the stregnth of Fuu, making them work together do they hold off “killing” each other. Mugen seemingly is a base level character, only concerned with prostitutes, food and liqour. But despite this has a secret past that he isn’t too quick to spill for his traveling companions. 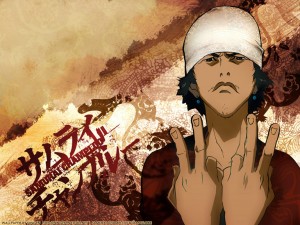 Last, but not least (because he is my bias in this series which makes him full of awesomeness) is Jin. A ronin ( a wandering samurai) enters Fuu’s establishment, ends up tangeling with Mugen, therefore becoming the third member of this traveling nomadic group. Jin is a character with a noble past, sullied by a secret surrounding the death of his master. Jin is quiet, thinks before he acts, passionate and intelligent. If Fuu is the heart of the group, Mugen the energy, Jin is de facto leader, with all of his strategy and quiet wisdom. 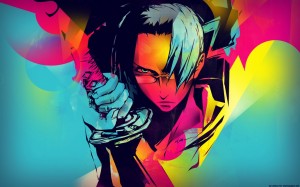 Only 26 episodes long, Samurai Champloo boast the soundtrack of a lifetime (might have one of the BEST openings ever), the adventure that is realistic yet combustible at all times, and a frank friendship that grows despite the three characters stating otherwise. If you’ve seen it, see it again. If you haven’t watched it yet….don’t make me COME and MAKE you watch it.

(A/N: I’ve had this argument four or five times. The hints of Fuu’s crush on Jin and the sub-sequential hints that he did care for Fuu should have been explored more…but then again Shinichirō Watanabe only gave us 26 damn episodes so. And no, being with Mugen just because he’s cool is retarded.