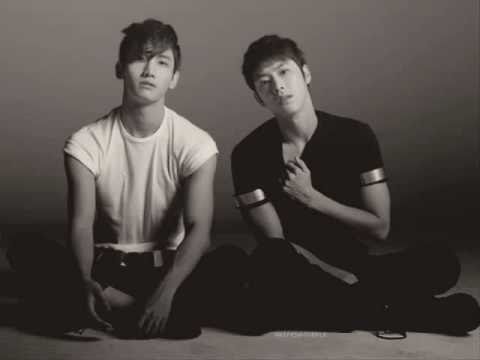 You ever wondered what other races have sex to? I’m African American so off top, I already have a wide selection of songs. I mean, hell they should really rename R&B “So, we having sex tonight, right?”. 95 percent of that genre of music about is taking ’em off, making love faces, making love in somebody’s club and then there is Ne-Yo’s “Say It”…ahem.

But I often wonder, what do white people have sex too? Hispanic? Indian? Asian? Korean…..

Well, you know me. You ALREADY know what’s coming next….

Yeah….I know what Korean people are having sex to.

Wait. That’s an EXTREME generalization. I actually don’t know what Koreans are having sex too. I apologize. So I’ll rephrase. If I were Korean, this would be on my “Headboard Bangerz” mixtape.

RIIIIGHT!! So when I say I was ALL in this song, for days pressing repeat, looking crazy like…this isn’t happening. Max (Changmin) and U-Know (Yunho) of DBSK-fame got me on this one. Although the song is about a break-up, you wouldn’t know until you looked up the lyrics. It’s a very sensual sounding song, and then Changmin hit so many “Yeah’s” and “Whoa-Whoas” that you couldn’t tell me this wouldn’t bang in America…(if they were speaking English.)

Hell, even if I WASN’T Korean….I’d have sex to this.

There’s a whole 16 minute mini movie to go with the song. Has ABSOLUTELY nothing to do with the song, so if you wanna see about three-four gun fights, some tae kwon do (I think) and 16 minutes of badassary, angst, and some matrix type shit…well. Here you go.