As with any body of intelligent human beings, when grouped together and a topic is placed in front of them, a variety of answer and conclusions will be reached. Whether those conclusions are all in agreeance or not, is up to the consensus of the group. This happens anywhere. For example you can take a group of theologists and have them debate about a certain event in history shrouded in mystery and you are guaranteed a number of answers will be given. As long as they have some sort of truth and their answer can be reasoned with facts (sometime tinted with opinion), the answer will be acceptable.

The thought of doing just that, gathering a solid body of opinions, was reached when on three or four Wednesdays ago, the latest chapter of Naruto had dropped and the “nerd” sector of Twitter went into a frenzy. For the longest, chapter after chapter, we all believed we had it figured out. Tobi had revealed himself to Sasuke , his previous identity masked (excuse the pun) and unmapped, that he was indeed Uchiha Madara. That he’d survived all these years and was deductively mapping the destruction of the modern shinobi world to be replaced with what he called peace. We believed it, and never questioned it until Chapter 559 page 15 when we are shown an Impure World Resurrection that reasonably shocked, excuse the French, the SHIT out of Naruto fans everywhere. 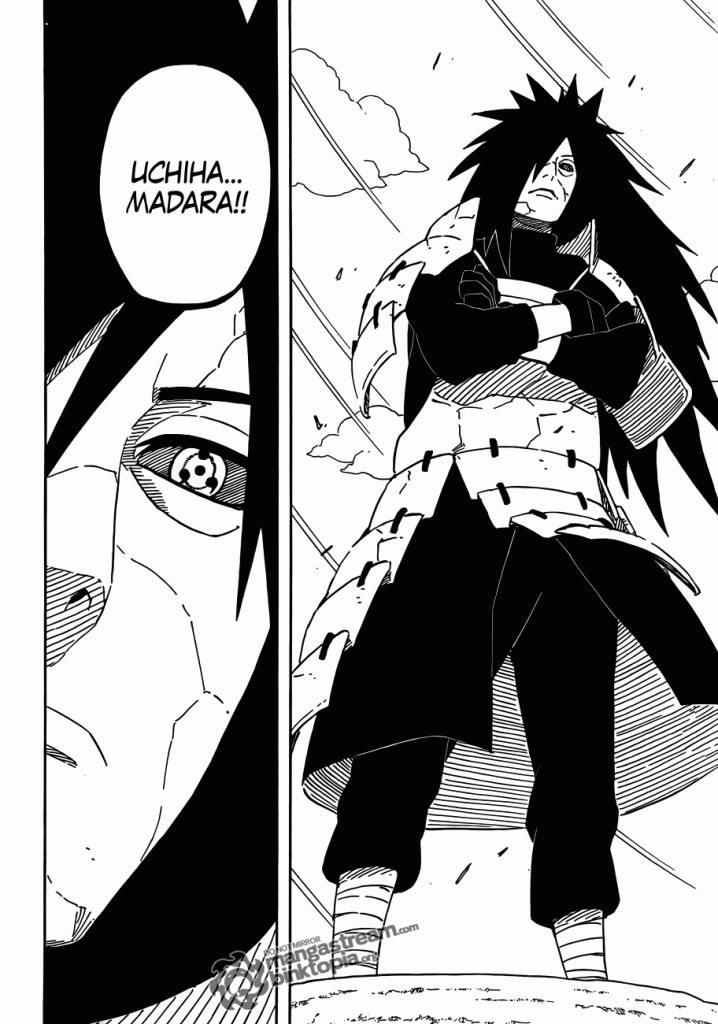 Thoughts were racing, minds where calculating. If THIS is Uchiha Madara…then who the hell is Tobi?

Hmmm… This is a tough one. I know people like to think Tobi is Obito, but I don’t buy it. Based on what we know of his personality via Kakashi, he doesn’t seem the type. I believe that Tobi is an Uchiha, but I’m thinking it’s one that we didn’t know about. Perhaps another survivor of the massacre with a well deserved axe to grind. I wouldn’t be surprised if Tobi were actually female…

When I read the chapter that proved that Madara and Tobi weren’t the same it shocked the hell out of me. Then I started thinking on something. I think Tobi may end up being someone important that was associated with the Leaf Village in the past that hasn’t been mentioned much or if at all during the manga. Someone close that realized the true power of the eye techniques and faked his death so they could move around in the shadows. I think many will start thinking of other Uchihas like Obito but we’ve seen people use Sharingan eyes that were not part of the bloodline.
Whoever it is I just hope they don’t drop the ball on this and make all the buildup be worthless.

Up until chapter 559 it was pretty much assumed that the man behind the mask was Madara Uchiha himself. Due to the nature of Tobi’s abilities and his extensive knowledge about the life of Madara and the history ninja world as a whole, no one really saw any reason to question if Tobi was really who he said he was. Of course that all changed with the summoning of Madara Uchiha himself onto the battlefield. After I read the chapter I took to Twitter and I had a pretty long discussion with Dennis which resulted in multiple theories. After giving it more thought, this was the theory that I came up with:

There are a couple of things that lead me to this. First off the dialogue between Kabuto and Madara after he was summoned suggested that Madara somehow expected to be revived. Madara and Kabuto hinted at a secret partnership and implied that Tobi was actually a “fake”. In 564 when Naruto confronted Tobi about his identity, Tobi recalled Kabuto’s summoning demonstration and he realized that the trump card was played prematurely. This would mean that Tobi is aware that he’s a clone of the original, but it also suggests that Kabuto is using his influence over Madara to go against Tobi’s schemes since it is clear that he somehow augmented Madara’s abilities without Tobi’s knowledge. (Plus he’s always had ulterior motives from the start).

It is possible that The Rinnegan that Tobi claimed he “gave” to Nagato originally came from Madara, who awakened it before his death. At any point after that Orochimaru could have obtained his DNA which Kabuto most likely collected after his demise. This would explain how Kabuto was able to summon Madara (among other legendary nin) in the first place. What this doesn’t explain is who could’ve cloned the original Madara. I suppose it’s possible that he somehow cloned himself since we don’t know the full nature of his abilities. My guess is that the older son of the Sage of Six Paths is somehow involved and that this is all an elaborate attempt to recreate the Sage of Six Paths through Tobi.

This theory could potentially explain the following:

Okay, in between finals and trying to get my thesis published, I’ve really been thinking about the identity of Tobi. Originally, we thought he was Madara. I mean he claimed that identity and there was really nothing to say otherwise. He had knowledge of the history of the Uchiha and seemed to have intimate information about the First Hokage. Things changed when we saw Kabuto summon the actual Madara. Then we noticed that Tobi even stated, in-directly, that he isn’t Madara. So now we’re back at this place of: who the hell is Tobi? Now I believe there are three options. The first would be that Tobi is Madara’s brother, Izuna. I mean he’s someone who has been around a long time and could possibly been behind the scenes all this time and could feel a certain way towards his brother. The second option is that Tobi is a child of Uchiha and Senju blood, perhaps the son of Madara or the First Hokage. This could explain his feelings towards the Hidden Leaf Village as well. The final choice, the one I hope isn’t true, is that Tobi is a mysterious NEW character we have no see before. If so, that would be slightly a cop-out, but it’s a possibility. Those are just my picks, I’m anxious to find out who he really is soon.

Definitely think it’s Obito, he covered his right eye alluding the fact that it was missing in my opinion, and has a similar hairstyle, chronological issues aside, and I think he somehow obtained the ability to travel time

Hell, I don’t know! That’s why I asked all of them! I was completely convinced it was Uchiha and with deductive reasoning the only Uchiha I thought strong enough to control Madara would be Izuna. Then Tito up there reminded me that if we’re going to take death out of the equations that opens the playing field for a gangload of Uchiha. So the Obito theory was introduced. Soon as I find a connection between either Izuna or Obito to both Nagato and Kisame (other than the foundation of the Akatsuki), then I’ll be able to decide between the two.

A/N: BUT seeing as Masashi Kishimoto has a way of either totally surprising me (Hello, Gaara’s Mom who wasn’t the bitch they made her out to be) or pissing me off (Hinata. Jesus Hopping Christ, why are we ignoring Hinata?) When it is finally revealed we’re either going to be shocked or sitting back going “I told you so”

A/N: You can find and follow these good people for awesome Anime talks (and other foolishness and debauchery on their Twitters)