You don’t have to be heavy in comics to know the whole Superman mythology. Sole survivor of Krypton who ends up on Earth as a baby and is taken in by a kind couple who raises him as their own. From there grows up to be 1 of our greatest hero’s. He then spends the rest of his life battling all types of villains (including arch nemesis Lex Luthor), stopping regular crimes and trying to maintain a relationship with the likes of one Louis Lane.

I have a lot of issues with the Superman story. For one, the costume. Aside from removing his glasses and rocking a Ricky Ricardo curl, there was no real disguise. You mean to tell me not ONE person could connect the two?

They had police Stations. Detectives on the payroll. Not one? You mean to tell me everyone in Metropolis was a stone cold idiot? How did they get jobs or handle heavy duty machinery? This really speaks volumes for their public school system. There’s no chance Bruce Wayne or Peter Parker could parade through the streets without a mask and not be recognized in minutes. Chicken Boo had better disguises than Superman and got caught every single time. It’s complete bullshit.

Next? Lex Luthor. The fact that Superman, a superior being with the ability to stop moving trains using just his bare hands actually had a regular nigga with money believe himself to be a worthy adversary is ridiculous. The FIRST time he mouthed off, I would’ve held him up by his chopper suit and punch a hole clean through his chest. Problem solved. Like how did they go back and forth for so long? Why wasn’t he dealt with? Because Superman is a dweeb, that’s why. Infact, there was no real reason for crime to still take place in Metropolis or anywhere in the world for that matter. Superman should’ve put the fear of god into the hearts of all mankind. Who was going to stop him? He’s motherfucking Superman. Bank Robberies? Nope. Snatch an arm out the socket and watch the crime rate drop 97% within the next 2-3 hours.

His love life. Dog, you’re Superman. Why is that a secret? I’m telling everyone and getting all the hoes. Wtf. Why would I have the ability to fly and still work a 9-5? If you can fly, you shouldn’t have to do anything regular people do. I’d dance in all the old Bad Boy videos and Suge Knight wouldn’t DARE tell me shit. The world would be a safer place because of me and I’d live like a Rockstar. The Fortress of Solitude would be the biggest bachelor pad known to mankind. I’d really just have sex, eat pizza, kill bad guys and twitpic my adventures. Yes, I’d tweet. I’d want you all to know how awesome I was. 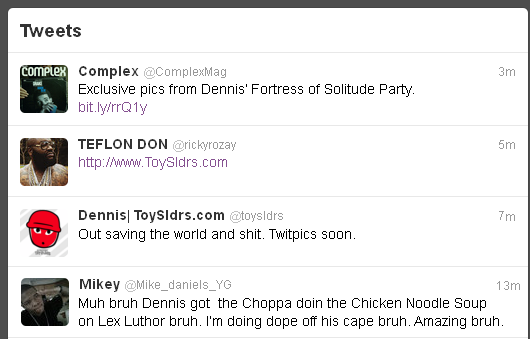 With all this in his very grasp, he’d rather sit around and struggle to say something to Louis Lane. Louis isn’t even bad bro! There was no style of finesse with Superman. I’d seriously fight crime in sneakers and they’d never crease. Infact I would’ve been the ONLY person with concords and Michael Jordan wouldn’t take god out his thoughts and turn down the offer of taking picture with me ( Hi Chamillionaire! ). I’ll just end this rant here and sum it up by saying, Fuck Superman. Seriously. I wanna wrap my fist in a Kryptonite glove and punch him in the stomach then stuff him into a locker anytime he gets mentioned.