You knew what time it was when you hopped outta bed on Saturday morning, turn the TV, and heard…

Yeeeeeeeeeeeeah bitches! The Power Rangers! A collective staple in our childhood where we would hop around like ninjas, kicking chairs, tables, siblings, all in the name of Good and defeating Rita Repulsa right?

I remember it well. I was always the Yellow Ranger, my brother the Black Ranger (cuz he’s a thug, my brother), my neighbor the Red, and my cousin the Blue.

She was the most useless, asinine, insipid character ever created. The PINK Ranger. Hmph!

Let me take this back, to give you a broader scope. The Mighty Morphin Power Rangers was a show that was drafted for American audiences and derived from the wildly popular Japanese show Super Sentai (taking plot and footage and inserting it into the show). Same premise basically, martial art expert teenagers that welded the ability to “morph” into first spandex clad warriors and then into mecha like animals to save the day (after the protagonist grew to a size that required extra large machines to win.)

The problem with the Pink Ranger isn’t her battle prowess. Both in Super Sentai (and the 5011 different factions of Super Sentai) and The Power Rangers, The Pink Ranger proved herself somewhat useful; the bow and arrow useful in long rang attacks. Her martial arts was pretty decent too. 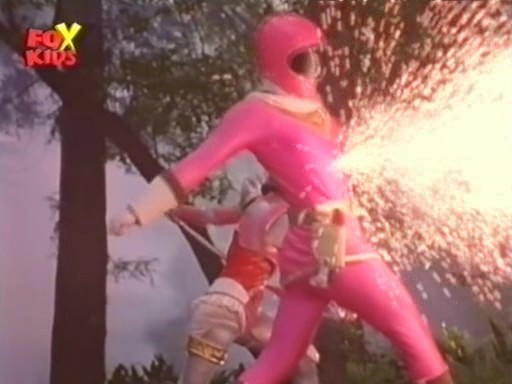 It was Kimberly/Amy Jo Hart, who was the problem.

Flipping all over the damn place with her forever wearing pink tooted up ass, and being practically useless if she wasn’t in her Power Ranger gear. If she wasn’t getting her ass handed to her by the Putties, or Trini/Aisha showing Kimberly who the REAL boss bitch was, she was crying for either Jason or Tommy; whichever of the simp asses could answer her weak feminine pleas first. She was either spending her time being grossed out, crying out “Ew” or “That’s Gross” or “I can’t believe this is happening” like the frail hearted woman she was, or completely freaking out. In the Mighty Morphin Movie, I think she called out to Tommy….Jason….whichever it was at least 12 times whilst being chased by the enemy.

What exactly is her point? The Yellow Ranger provides sass and reasonability, the Blue the brain of the group, the Black Ranger….apparently comic relief, while the Red and White/Green ranger fought for the Alpha male position in the group. Kimberly provides….flexibility? What do Pterodactyl do when morphin? Kick up dust?

And back to this Tommy/Jason love triangle the little harlot created. Watch the episodes before Tommy showed up. She was often seen using The Red Ranger as her shield-flirt/fuck buddy-. Shy glances and blushes when he’d put his hand on her shoulder. And then this bipolar Green negro shows up, and just like that ….”Tommy Who?” That’s probably why Jason was so gun-ho to take the Green Ranger out. The allure of the pink had them literally about to kill each other. Pink Hoes before Bros apparently.

Am I reaching? Probably. Do I care? No. I spent enough of my childhood watching a woman single-handily destroy the cute wispy color that could have been transformed into something powerful for girls, but yet we gotta watch the Pink Ranger tip tap all around Angle Grove, while they’re trading out the Yellow Ranger like she’s last years Jays. Rita Repulsa should have taken her out Episode one. Gokai Pink woulda slapped the shit outta Kimberly.

The below video is WILDLY inappropriate and completely disrespectful to the Pink Ranger franchise. For that, I lowkey apologize as I laugh and hit replay.
http://www.youtube.com/watch?v=ss2cztn5Z0E

*throws down some ninja dust and escapes out of the room*