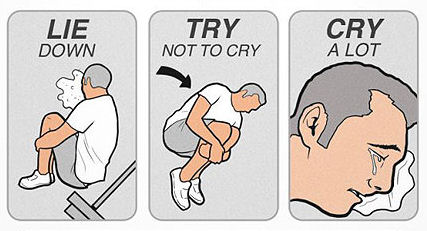 Every movie, book, show, you name it, usually follows a certain theme or contains a specific troupe; star crossed lovers, good girl gone bad, metaphors and allegory, betrayal and irony. All of these things. They make them special, unique in their own rights and for some people they are the solitary link of connection between making a story line fictional and making a story line speak directly to the audience. We explore these themes and tropes everyday, it’s what makes connecting with a story so powerful, the ability to see into, break down and relate.

However there are some we will never be able to relate to. Understand maybe, but never relate to. One specific theme that usually pulls at heartstrings is the misunderstood hero. Normally, the hero is the protagonist, we know his every move, we understand and it usually culminate to us yelling at a screen, because with that omnipotent power given to us through their eyes we can see things that others around us can not. With the misunderstood hero; in the form of an asshole who can’t communicate correctly, or the double agent, or the unlikely hero, we are surprised at first, then throwaway brick connection began to form bridges between memory and understanding. NOW we understand why this happened, OH, we get why that happened. It is always tragic and it always hurts because once you’ve figured it out, now you feel the betrayer, the one who didn’t and couldn’t trust, the unworthy.. 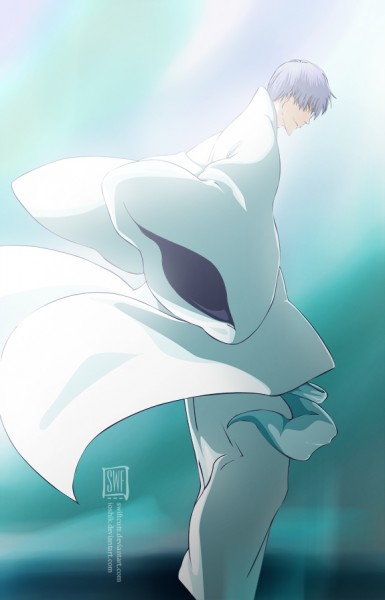 What He Did: From the first time we laid eyes on Gin Ichimaru, we were convinced he was up to something. It could have been his fox feline eyes, his ever constant smirk or his ability to speak in a circular way, reveling in the satisfaction of our confusion. We knew he was up to know good, could feel it down in our bones, and for the most part, we were absolutely correct. Gin was the Captain of the 3rd Division and a loyalist to Sosuke Aizen, the Captain 5th Division, and leader of the defection of Soul Society. As we got a glimpse of his past life, we were witness to Gin’s crimes as the Lt. Captain under Aizen, killing when told, lying when commanded and laying the seeds for deceit as he pleased. His first murder was the 3rd seat of Aizen’s company, which he did so without so much as a blink. He was directly involved in the Hollowfication mutiny against who we now know as the Vizoreds; he assisted Aizen in luring the high ranking Shinigami and witness their Hollowfication. He was also a decisive factor in the set up of Kuchiki Rukia’s execution as a segue to release the Hōgyoku from her body. His final act of treason was to betray all of Soul Society and Seireitei by following Aizen and Tousen to Huecho Mundo to lead an army of Arrancar against them. 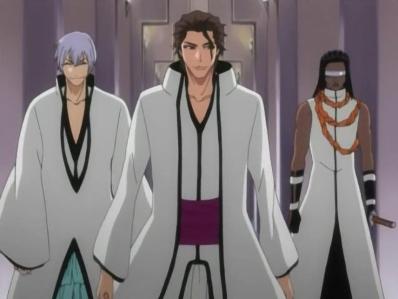 Who He Did It For: As a child on the desolate streets of Rukongai, he comes across a starving Rangiku Matsumoto. After feeding her and finding her shelter, they become fast inseparable friends. The bond between the two of them was so strong, so unbreakable that upon finding out that Sosuke Aizen was directly responsible for Rangiku’s collapse (Aizen was stealing energy from Shinigami’s, sometimes to the point of death, to cultivate energy for the Hōgyoku. Rangiku was one of his victims) he vowed to kill Aizen. 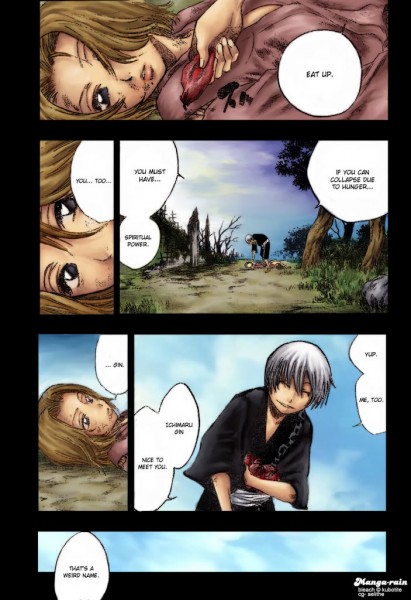 His Plan: He becomes a child prodigy, speeding through the Academy at breakneck record speeds, gained a seated position under Aizen. To get closer to Aizen, he clears a bloody path to the top to prove his worthiness to the Captain of the 5th Division.

How He Proves Himself: Fast forward to the end of the Fake Karakura Town arc. Gin and Aizen are walking through the streets of the real Karakura Town, stalking the friends of Kurosaki Ichigo as they head to unleash the power of the Hōgyoku. Rangiku shows up to stall the two from harming Ichigo’s friends and Gin begs a moment alone with her. They have a heated reunion full of Whys and How Could Yous, and the very last thing we see is an *dead Rangiku on the roof of a building as Gin flies off to Aizen. As they are making their way towards their destination, Gin briefly touches Aizen sword. Here is where it all begins.

.To defeat Aizen’s total hypnosis, Gin has learned after a decade of following him (revealing the reason for his “loyalty” to Aizen, to kill him) is to touch his blade. He fires at Aizen and almost wins, except for the power of the Hōgyoku is too much for him and Aizen slices through Gin and leaves him for dead. Rangiku finds him. We don’t know at what point she figures it all out, when he used Kido to knock her out and hide her reiatsu, when she asked about Kira, or if she knew all along, but she knows now why Gin did what he did. For Soul Society, for her, so that she would never cry again. 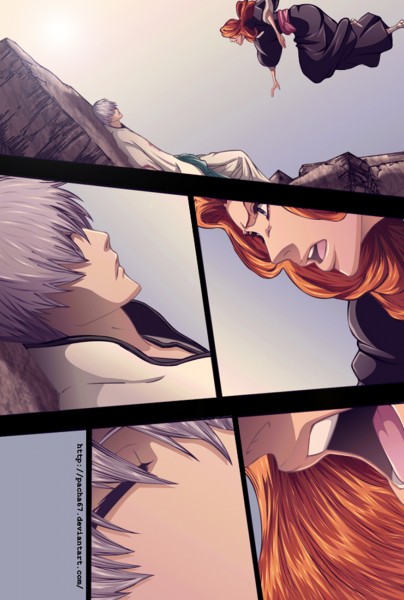 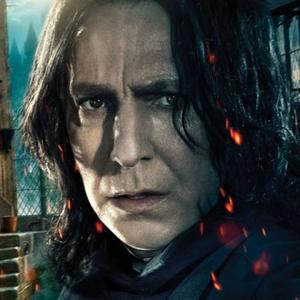 What He Did: There was always this confusion around Severus Snape’s true intentions. Was he an ally, was he the villain? No one could ever tell what he was, despite his numerous attempts to help the Potter trio and those around him. His dark mannerisms, his inability to be lenient, his unmitigated disdain for Harry Potter all pour this thick layer of distrust when it came to Severus Snape. If you add in straggle members of the Order of the Phoenix ( a group of wizards who fought in the first Wizarding War against Lord Voldermort) and their personal opinions about Snape, then that thick layer became hard and tough to penetrate. He’d, up to the a certain point, had never committed any crimes against Harry and ‘nem; his true crime laid in his intentions that could never quite be figured out. When people are unsure of something, it becomes a bad thing, an evil thing, especially in the Wizarding World. That certain point, however came, with the reemergence of Lord Voldermort in a human body. Severus’ former alliance as a Death Eater came back to the forefront and he was once again on the wrong side of the justice it would seem. The final condemning factor was his *murdering of Albus Dumbledore under Lord Voldermort’s command (really it was Draco’s job but whatever) and his acceptance as the new HeadMaster at Hogwarts. 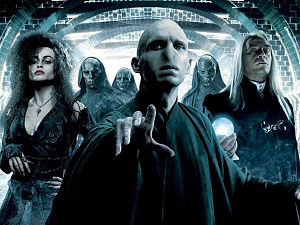 Who He Did It For: When Snape was a young boy, he on perchance lucked up and discovered a young girl by the name of Lilly Evans, a resident of his town in Spinner’s End, as a girl who possessed magical powers. Himself, a child of a pure blood witch and a muggle, who styled himself “The Half Blood Prince”, was talented in the ways of magic and the connection spawned a friendship that lasted for years. What started off as a friendship soon grew into an unrequited love for Snape, and after his first formative years at Hogwarts, it had grown so strong that Snape was unable to stop it, even after the introductions to Lily’s future husband, James Potter. 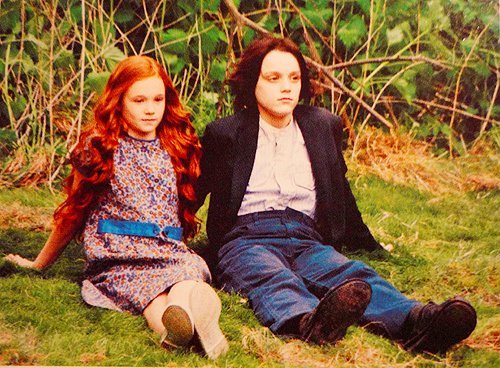 His Plan: Snape’s original alliance was indeed to the Death Eaters and to Lord Voldermort. It was him who told Old Lord Voldy about the prophecy. It wasn’t until Snape learned that the child of that prophecy would be the son of now Lilly Potter, did Snape’s alliances change again. In an effort to save the child and by proxy Lily’s life, he became a double agent for Albus Dumbledore. Although it was unsuccessful, Snape’s interference allowed Lily’s sacrifice for her son. It it here where Dumbledore convinces Snape to watch over Lily’s son in her memory and in her honor.

How He Proves Himself: There are so many things about Snape that we don’t know. And that was his intentions all along. He is a decisive factor in getting Harry prepared for the wars and making sure Harry stays alive. Time and time again, Snape steps in to save Potter’s life, even if the young man did not realize how and why. He passes along instructive lessons for Harry’s preparedness against Voldermort ( too many to list, but there IS a list, a long one). His string of sacrifices for Harry’s survival and the war was his personal relationship with Albus Dumbledore. Everything he does, in the end is for Lily Evans, right down to his assassination of Dumbledore.

Upon finding out that Voldermort was sending Dracy Malfoy to kill him, he asked Snape to do it in Draco’s place. Albus had contracted a virus/curse that would end in a very painful death and he opted to use his death as a way to strengthen the resolve of the Order of the Phoenix. With Dumbledore’s death and Snape as the headmaster of Hogwarts, another prophecy is given to Voldermort that led in him betraying Snape, having the Horocrux Nagini strike him to death. Here, as he lays dying, gives Harry’s his memory in the form of his tears and we, the audience finally realize where Snape’s true loyalty lay. With Lily and the Order of the Phoenix. 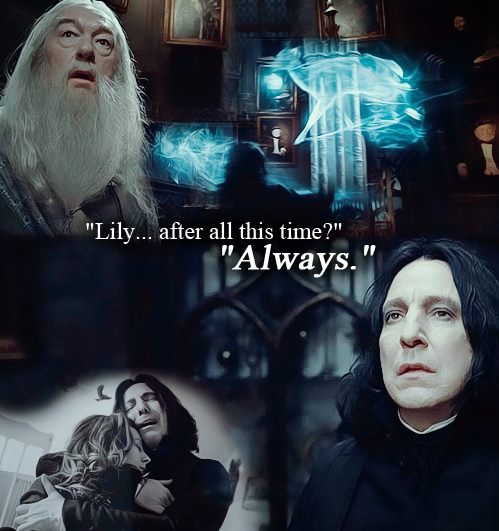 So there you have it, enough angst to cry you pillow soaking wet tonight. Or at least that’s what I’m going to do since I’m a sucker for these sort of sacrificial acts of love that only tear at your heart. I mean, you can’t even get over things like these because they are SO tragic. Matter of fact, go, KA! I have things to weep about. If you’ve never seen Bleach or the last installment of the Harry Potter movies, I suggest you do so. They ARE good and they are moving, something you wouldn’t expect from two works aimed for children, but hey, angst knows no boundaries.