These current fillers focus on Madara’s Infinite Tsukuyomi and what each character is dreaming. We’ve already seen Tenzo’s, Killer B, and TenTen (Neji is alive and all touchy feely with her I LIVE!). Now we seem to be the dream of Tsuande. It’s an alternate universe (based of Jiraya’s stories) where Minato is still the Fourth Hokage, Kushina is still alive, and Naruto has grown up with both of his parents. However, he is still the Jinchuriki, and is still a hyperactive, loudmouth brat with a slap and tickle with kunai frenemy relationship with Sasuke (as well as his crush on Sakura). Their friendship is more begrudging respect, and it even shows the affection (although hardboiled and rough around the edges) that Sasuke has for Naruto. Everything is the same, except a step to the right, in what you would think would have bee the ideal world for Naruto.

Except that line of thinking is wrong.

The villagers, on a whole, are not worth shit.

In the very first episode of this dream, we see, as mentioned, an energetic, ambitious Naruto. He runs along the roof with a huge smile on his face, excited with the possibility that his next mission will be a S-ranked one. Nothing about Naruto presents as a threat. He has never lost control of Karuma, there has been no an attack on the village WITH Naruto as a Jinchuuriki. He’s never hurt anyone.

Regardless of that, guess who’s still a prejudice packed of idiots?

As Naruto runs, a group of ladies are watching him, one who uses an obvious slur to denote Naruto’s Jinchuuriki status, and is only stopped from continuing by another in the group who reminds her that Naruto is still “The Young Lord”, son of the Hokage. Her mean words begrudgingly come to a stop.

Naruto then stops by a mask shop to purchase a fox mask, one similar to an ANBU mask, because who knows what path Naruto would have taken if the Akatsuki and the War hadn’t have come along. His sudden appearance scares the shop owner. And as Naruto is trying to purchase the mask, the shop owner tries to give it to him for free as the Hokage would scold him for making him pay. Naruto insists that he has to pay (because he is a sweet boy) but sees he doesn’t have the money so he promises to return to buy the mask. This seems like a sweet gesture and evidence that Naruto was raised to have manners and respect the villagers. They can’t see that, however. As soon as Naruto leaves, the shop owner tells his wife to throw salt and that if Naruto wasn’t “The Young Lord” they would have ran him out of the village years ago.

Note: Throwing Salt Over Your Left Shoulder Was Often Done To Get Rid Of Bad Luck. The Thought Is That The Devil, That Tricky Son Of A Bitch, Was Standing Behind You, Obviously Always On Your Left Side, And That The Salt Would Land In His Eyes, And Thus Distract Him From Causing Any Real Mischief.

I hate the villagers. Not only in Konoha, but in every village there is a Jinchurikki. They are scardy cat gross people.

Let’s break down the word and definition of Jinchuriki for you. Jinchūriki (人柱力, Literally meaning: Power of Human Sacrifice) are humans that have tailed beastssealed within them. They exhibit extraordinary powers due to the immense chakra reserves they possess. (via http://naruto.wikia.com/)

Now, granted there have been a few, such as Gaara, who have been uncontrollable Jinchuuriki. (Gaara’s bloodlust was born from the prejudice his village (and family) had shown him. He was a bright a loving child before that malevolence and probably, if he had been built up with love, he could have battled Shakaku in a better manner, rather than letting his poison his mind.) Because the Tailed Beast are associated with wild uncontrollably power, it makes sense for people to be wary and maybe fearful of that power.

It’s terrible to hate someone for something they had no control in becoming. There aren’t many Jinchuurikis who CHOSE to be Jinchuurikis. Normally the ones who chose to be this are generally evil or misguided (Hello Madara and Obito!). So for those, where this was forced on them, usually as babies or small children, for a village of adults to treat a child this way is ridiculous.

But is it really ridiculous…as in abnormal?  Naruto, at its center, is a story of prejudice, preconceived or taught. Most of the characters were introduced to prejudice early on and it helped shaped the way they were raised. Naruto and the other Jinchuurikis, Sasuke and the Uchiha betrayal. Kakashi and his father’s suicide. On the other end of that, you have people who were introduced to prejudice and let it guide them; a young Neji comes to mind.

What irritates me about this is the way the characters who are the subject to this discrimination decide (and eventually fulfill) this unspoken requirement to gain the favor of the village or as Naruto says “Make the village acknowledge me. (Think about how heartbreaking that is for a moment. That a child has to—okay, I’m getting distracted.)

The only fault I’ve ever found with Naruto, besides NEJI FUCKING DYING (and ruining a ship I’d been planning like an arranged marriage since they were kids. NejiTen FIVE EVER!) is this one fact:

The underlying message here is this: It’s not the village who has to improve, it’s Naruto. It’s not the village who has to become better, be filled with better people, do fucking better…it’s Naruto. Naruto has to train with abandon, be a beacon of hope and tireless optimism for himself and those around him, have the ethical stamina of a saint, almost die, and save the village, and it’s only then, only then, after he puts his life on the line for a village that has hated him since he was BORN, do they finally acknowledge him.

Do you understand my anger?

Understand what I’m saying. The village never ever ever got over their prejudice for Naruto as a Jinchuuriki. It only became a secondary factor because he saved them.  That’s the condition. What Kishimoto is telling us is the ONLY way the villagers accepted Naruto is basically because…they had to. They are somewhat decent people, you don’t outwardly hate your savior. You can still be scared, resentful, full of hate…but you can’t do it out in the open now.

This message ties into so many other facets of life. People, every day, are hated for things they cannot control, whether it be the color of their skin, their sexuality, what gender they identify with, what language they speak. Kishimoto is letting you in on a secret. People will hate you for those things and there is nothing you can do to get through to them, no matter how sweet, kind, noble, ethical, upstanding or righteous you are. People will still hate you. And sometimes for that hate to be set aside, you have to damn near throw yourself on a sword for them to acknowledge you.

And I hate that it had to happen to Naruto. It shown in a way that makes you cry (because boy did I cry at the end of the Pein arc), it’s supposed to make you feel all warm and bubbly, but when you start peeling back the layers, you see…

Nothing really changed. The hate remained. Naruto went on to be one of the Heros of The War and eventually Hokage, which changed him in the eyes of the youth (as exhibited in Naruto the Last). But it only reinforced one thing. Naruto, in the end, STILL had to prove himself, beyond a shadow of a doubt, that he wasn’t “the devil” to gain the love of the villagers. It is my opinion that even AFTER the Pein arc, that making him Hokage would have been out of the question. With his victory during the Fifth Shinobi War, he reinforced the notion that in order to be accepted, he had to excel leagues in front of his peers.

The villagers are terrible people. 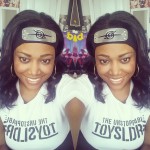 Jade is an author, blogger with ToySldrs and BankaiAndChill, as well a vlogger on Youtube. Check her out on her channel at Bankai and Chill.

Look, I hated Distance. It’s a song by Long Shot Party. It’s borderline ridiculous, borderline campy, and borderline way too loud.  The first time I heard it, I immediately turned the volume down and stared at my screen like, this, THIS, is the follow-up to the bad ass, make you get out of your seat, Hero’s Comeback???

But after 25 episodes of hearing it, it became one of my favorite. I rock OUT to Distance, okay? I mean I get it. I GET IT. Repetition is the breeding ground for adoration. I get it. It would be remiss of me to not get it. Anime openings are a unique thing. While American cartoons usually have this overarching background instrumental, one opening fits all, what you see is not what you’re going to get because it always stays the same opening, Anime openings are flexible, they are fluid, and most of all, and they are intrinsically in tuned with pop culture. On top of that, they actually keep the watcher aligned with what’s going on in that particular arc (or season depending on what show and what era you are watching. For example, Sailor Moon gives you openings depending on the season. With the season, you’ve got the same song, Moonlight Densetsu, but a different visual opening letting you know what is going on and who’s going to be added to the cast this season. Note: This changes with the last season where Sailor Stars Song (Makenai) is used instead of Moonlight Densetsu.)

So what’s so magical about them? It’s multifaceted.

So with that said, my emotions (which mirror Team 7) are tied into hearing Distance. Hearing the song, (which I love now) triggers, one, flashes of the actual opening—Naruto and Sasuke slowly drawing towards each other, not with a look of hate in their eyes but…fate? IDK), triggers whatever emotions I had WATCHING the arc, and three one of the main theme of the series, FOILS AND FRIENDSHIP.
Although I’m using Naruto as an example, the same could be said for (picks an Anime series out of a hat) Inuyasha…Bleach, Fairy Tail, One Piece, ect, ect. There is magic (and marketing—just imagine what having your song continuously play as an opening of a popular anime does to sales…whoa) in this.

Speaking, and I’m probably speaking for everyone when I say that, Anime Openings (and Endings) should be a complete genre of music.

One Half – Makoto Kawamoto (Rurouni Kenshin)

Tell me whats YOUR favorite Anime opening? Matter of fact, tell me one you hated and eventually ended up LOVING! I promise, I won’t judge.

Jade Brieanne is a Durham, North Carolina resident from Fayetteville, North Carolina. She is a cultural arts blogger on ToySldrs.com and a vlogger with ToySldrsTV and Jade, Please Youtube channel. She is also the author of THE HALO OF AMARIS, the first in the HALATION trilogy. 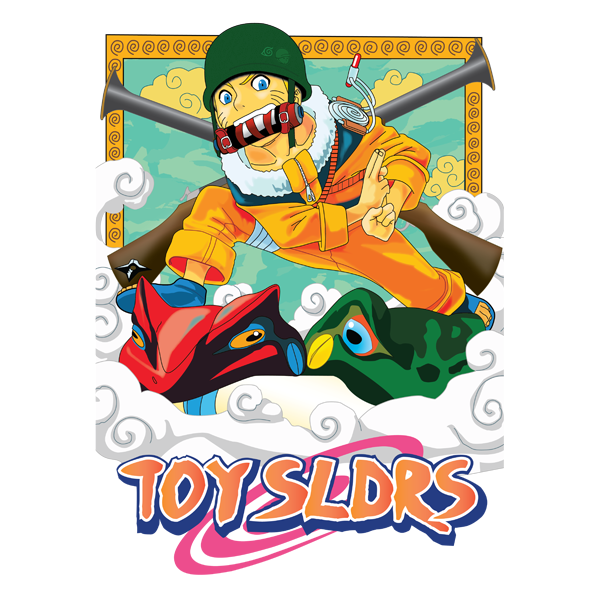 Illustration No Jutsu. New poster print dropping in the Shop this Friday. Look out for it!

Ryan Higa of NigaHiga YouTube fame has delivered once again! 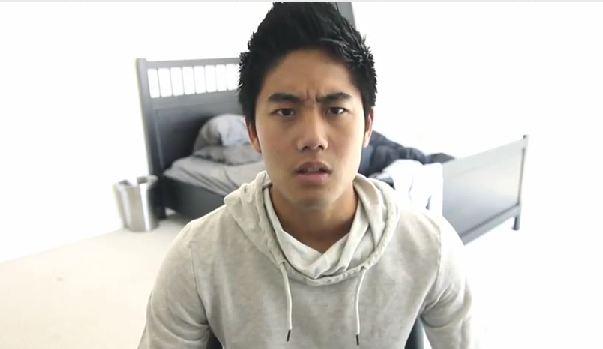 Now we have an superbly done, comical rendition of Naruto for Geek Week.