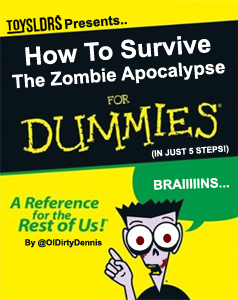 How To: Survive the Zombie Apocalypse

After really getting into AMC’s Sunday night hit “The Walking Dead”, I usually read up on other peoples opinions via Twitter as it takes place to see where I fit in vs other viewers take on situations as they occur in the hr long thriller. To my amazement, there’s really a lot of people who feel an overbearing sense of compassion. Weird. Or maybe, I’M the weirdo. I doubt it.

In a world full of Zombies, I don’t see the benefits of chasing after people when it could be potentially dangerous for the rest of the team. With the way some of you think, I can see how you wouldn’t make it very long. That sorta gave me the push I needed to finally coming around to write this guide. Yeah, I know what you’re thinking. What makes ME, a simple clothing designer/blogger qualified to write a survival guide? Well, my qualifications are quite extensive. Ranging from hours of Resident Evil gameplay to careful analysis of movies such as Zombie Land. I mean really, who could possibly be a better choice for this? (Don’t answer that.) Now that we’ve cleared that up, lets set the scene: 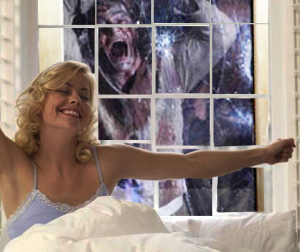 You wake up. Drool all over your pillow, cold in your eyes and morning breath that could melt plastic. Time to slither out of your bed and reach for the scope, right? Wrong. Do me a favor and take a quick gander at the window behind you. See that? Yeah, holy shit. You. Are. Fucked. What do you do now??? Panic? Cry for your momma? (Don’t cry for your momma, by now she’s probably a zombie momma and there’s a good chance you’ll have to place a pencil clean through her temple at some point. Shit’s real out here now, b.)

1. Pack & Go:
You aren’t gathering supplies for a family get away, we’re talking survival folks. Pack light. Snacks, couple water bottles, 3 Tees (Preferably Toy Sldrs. Dope plug right?), Boots and extra underwear. Yes, underwear. Scratching your nuts because you got crabs from wearing dirty drawers for a week CAN and WILL get you killed out here. That goes for you too ladies. Being distracted by an itchy crotch can be the difference between noticing that zombie sneaking up on you or mindlessly thriller dancing through these streets.

2. ammuniT.I.on:
You’ll need guns & ammo. Unless you’re friends with T.I., your best bet is to hit any nearby police station as quickly as possible. If you live in the hood, local drug dealer works too. However before you even make it there you need a weapon to at least keep you covered. Quickest weapon you can possibly make is a spear. Broom/Mop stick + Biggest Knife you own + Duct Tape. The last thing you want is a hand to hand fight with a zombie who’s only goal is to scrape/cut/bite you. This will keep them at a distance (hopefully.) At least until you get a better weapon. Shovels work too.

3. Real G’s & Lasagna:
It should go without saying but, move quietly. The less attention you bring to yourself the better off you’ll be. This is why weapons like Spears, Knives, possibly Crossbows (I’m reaching here) are great since they can be reused as many times as needed. Especially in situations where you live in the Projects and have to make your way passed a hallway full of upset Baby Momma’s and their Fifty-leven zombie babies.

4. The Hideout:
I love New York, but the minute the Zombie Apocalypse hits, I’m getting the fuck outta here. The last thing you need is to be stuck in a major city with tons of people who may be potential zombies. Avoid large herds. A small town with lots of open land is your best bet. Have safe routes. Now you may not have Kevin McCallister’s talent for making traps, but digging a few deep holes around the area will at least slow them down. Save you some ammo too. Don’t forget to stock your new hideout with any food you can find.

5. A-Team:
So far so good. You got some clothes, weapons, food, and even somewhere to stay. Now you just need a team. Not everyone is about that Rambo life, and frankly with nothing else to do all day but survive and kill, you’ll need the company. Team up with any survivors you find along the way. That don’t have kids. Yes kids are cute and funny and awesome to watch grow up into well mannered adults. UH, WAKE UP NIGGA! The world has gone to shit. Kids are now useless. You don’t have time to help people and their booger nose filled kids. Lord help you if one of them gets lost and wants everyone to go search for them. Nuh uhh. Save yourself the trouble.

Don’t get it twisted though, your team is supposed to be more than just having people around to keep you sane. A helping hand is always useful. You need rational human beings that know in the new found Zombie World you might have to leave a kid behind for the sake of the squad. Shit happens. You happened to find lil’ timmy and he somehow wandered off from the team in the middle of the night? Guess who’s NOT going after him? *points to self* This guy. Or how about that one member with the bad knee slowing everyone down? You and your bad knee are getting left behind. It happens. How about that one person who just doesn’t seem to be pulling their weight most of the time? Wellllllll….

Hey, you get my point.

Follow these steps and I can guarantee you won’t die…………right away. Good luck!